For the last couple of years, eSports have increasingly drawn the attention of marketing execs all over the world. In a remarkable cavalcade, the perception of videogaming events has shifted from being kid’s stuff to one of the most prized media spaces.

This, of course, is not without reason. The numbers of eSports are staggering. First of all, just look at the money they move. Leading eAthletes can earn millions of dollars in tournament prizes, even if they are barely 16. Sponsors now invest billions of dollars in sponsorships, and it’s easy to see why: it is estimated that by 2023 the global eSports audience will rise to 646 mln people. This is a lot of people by most standards.

Of course, the real value in eSports is not just the people playing, but the people watching. An avid, growing audience that resembles those of traditional sports.

Stealing from the sports’ sponsorship playbook

So far, eSports have been offering the same kind of opportunities that one would expect from a football or basket league: sponsoring a team or a tournament and getting your brand’s name and logo in front of a huge crowd. On top of this, brands have the space to get a bit more creative.

This is not complex and pretty straightforward. Most of all, it’s kind of traditional: marketers know how to do that. It’s not surprising that we saw some big, heritage brands moving swiftly into eSports: you just need to know about it and have money to spend.

This is a great tool to build awareness, but not very useful for differentiation, as all brands play kind of the same role.

How about those who don’t compete and don’t watch?

Numbers, though, should not blind us.

If you look at the Fortnite World Cup – one of the biggest eSports events of all times – you will be amazed to know that 40 million people participated worldwide. Not watched: played. That’s new: common people don’t play in the FIFA World Cup (the real one), they just sit on a sofa watching TV. The participants / athletes ratio in eSports is significantly higher than in traditional sports.

Still, you can’t ignore the fact that Fortnite players across the world are roughly 350 millions, meaning that around 88% of Fortnite players didn’t compete in the World Cup. Did they watch the Tournament? Apparently, 2 millions of them watched the finals. Similarly, the League of Legends World Tournament reached a viewership of 3.8 millions, but the game has around 120 millions players. In addition to this, as eSports become more and more professionalized we might see the players/watchers ratio get even lower as people realized competitions are out of their reach.

This is not to diminish the media value of eSports, which is really self-evident.

It’s just useful to remember that, beyond those who play and those who watch there is a huge community of users who just play. They are not fans of the competitive side of the game, they just enjoy it for other reasons.

Not to forget the billions of people who play games that don’t qualify as eSports, like single-player games, puzzle games, simulators, mobile games and many others. Titles like Final Fantasy, Cyberpunk 2077, Assassin’s Creed Valhalla, Ghost of Tsushima or even the wildly popular Flight Simulator have no competitive league.

Let’s compare the number of eSports audiences to those of gamers worldwide.

As we said above, the global audience for eSports is projected at 646 mln people by 2023. On the other hand, It is estimated that gamers worldwide amount to 2.7 billions. Today.

Roughly 75% of gamers are outside the eSports world.

Put otherwise, not all games are esports games, and not all of those who play esports games play them in a competitive mode.

When you look out of the eSports bubble you will find yourself in a much bigger and diverse ocean: gaming culture. 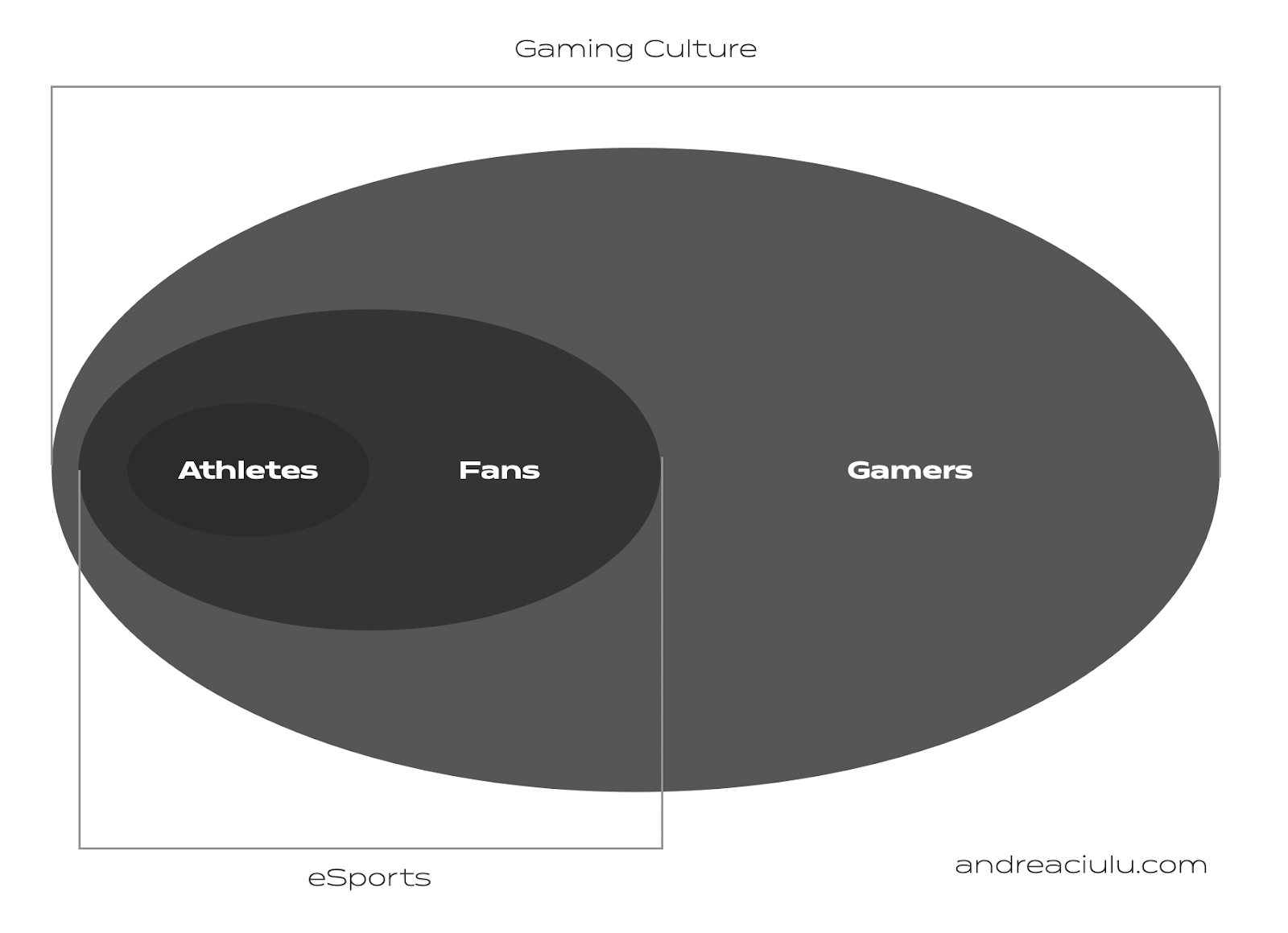 Understanding gaming as a culture

eSports made gaming visible to brands, by taking a passion out of bedrooms and living rooms and bringing it onto the stage of huge physical events (which have completely disappeared during the pandemic). This is a chance to understand what gaming is. It’s not just a competitive event: rather, it’s a culture.

Actually, it’s one of the dominating forces in culture today.

It’s not that complicated if you think about traditional sports. Professional sports are very visible: you have the lights, the cameras, the Messis and the Lebrons. And then you have sport as a part of human experience, practiced by billions in different forms.

Sport could be your kid skateboarding with friends or an 80-years-old practicing tai chi.

The same goes for gaming: while the core audience might be youngish males and the pros might be very visible, the gaming community (around 1/3 of the human population) includes all genders, ages and motivations.

More broadly, it is useful to understand that gamers are moved by different motives, and competition is only one of them. In 1996, professor and game researcher Richard Bartle plotted gamers on a two-axis chart, with two main dimensions: acting vs interacting and players vs world. 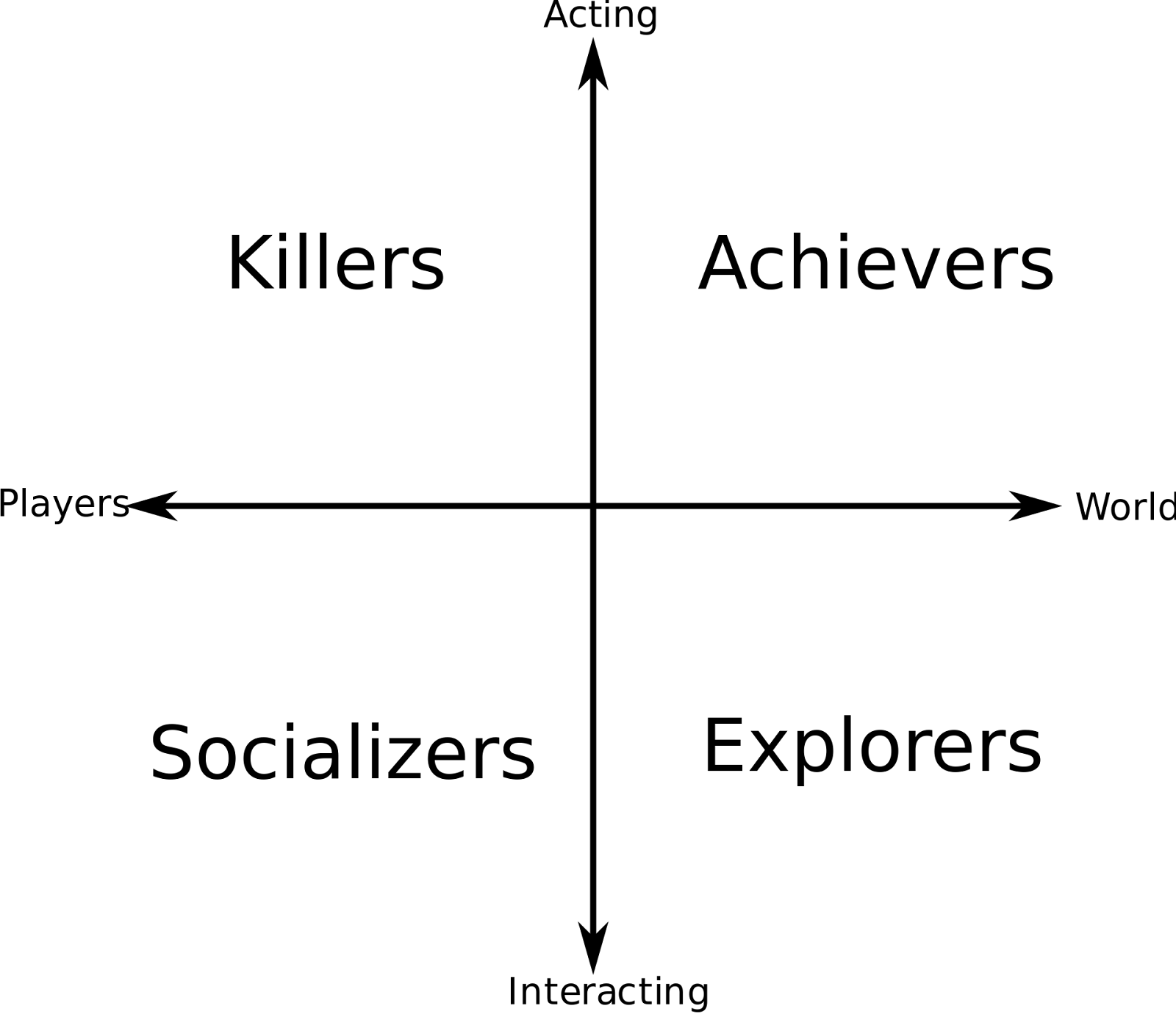 As a result, players might be Killers, who look to dominate other players (that would be the vast majority of esports players), Achievers, who want to unlock in-game prizes (that might still apply to some eSports titles), or they might just enjoy spending time inside the game, as Explorers and Socializers do

Any marketer will realize how focusing on competition will only talk to a portion of your potential audience. So, how do you leverage gaming?

Integrating an eSports strategy and a gaming strategy

Of course, eSports and general gaming are not mutually exclusive but they can live side by side within a broader brand strategy.

Just look at what Nike did (and does). In the early days, sport brands used to focus on professional teams and players who endorsed the brand. Nike gradually widened its scope to include and narrate the everyday athlete, her world and her struggles.

Then look at Nike today: the brand is associated both with competitive sports (by sponsoring teams and having star athletes endorse it) and with amateur sports. In this case, Nike is able to tell a kind of story that differentiates the brand and resonates with the user’s personal experience. Some experiments are happening in fashion (think about the Louis Vuitton X League of Legends capsule or the experimental game by Balenciaga) but brands can still take a lot more out of the gaming culture.

Talking to gamers worldwide will be less straightforward: it’s not just about buying media, but rather about creating moments of interaction that gamers from different “tribes” might find interesting and tailored to their passions. Brands will need to invent different actions to reach gaming families, fans of quiet games, or explorers who prefer to get lost in virtual worlds rather than compete. They will need to hone their knowledge of the gaming language, but it will be worth it.